Billionaires are not our salvation

I look over conservative’s reaction to Elon Musk buying Twitter and I fail to understand why they are excited. Elon says he wants a platform that prioritizes free speech without any kind of track record at all. We’ve seen this before with Donald Trump, who promised big things like Mexico paying for a wall. Despite that never happening a lot of them came back in 2020 to vote for him.

CNN+ is shutting down.

Disney is being reined in.

It's a bad time to be woke.

I don’t know what changes are going to happen to Twitter now that Elon is going to be in charge. I like Twitter so I hope we’re just going to see small changes that improves the program. But I’m also open to the possibility that Musk could ruin the platform. I’m not going to delete my account like many others have done, I’m going to see where this all goes.

Just because Musk is a real-life Richie Rich, who just bought him a new toy, doesn’t mean Twitter is going to be better for it. Musk has had several failures before, from his stupid underground street to his attempts to but computer chips on monkey brains. Conservatives are looking for some kind of savior, but I don’t think the second coming of Jesus is going to be a billionaire. 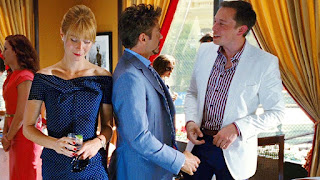 And Musk isn’t a genius either… perhaps if I really need to say he’s one I guess he’s a genius at doing pump and dump schemes. He’s found success doing what he’s doing here, found someone else’s work and bought it. He didn’t write the code for Pay Pal, someone else did that and he bought it. I’m not saying that’s a bad thing but I’m not going to just pretend in my mind he’s got some cartoonish intellect like Tony Stark from Iron Man.

Posted by Joshua Hadley at 6:33 AM
Email ThisBlogThis!Share to TwitterShare to FacebookShare to Pinterest
Labels: billionaires, elonmusk, Twitter