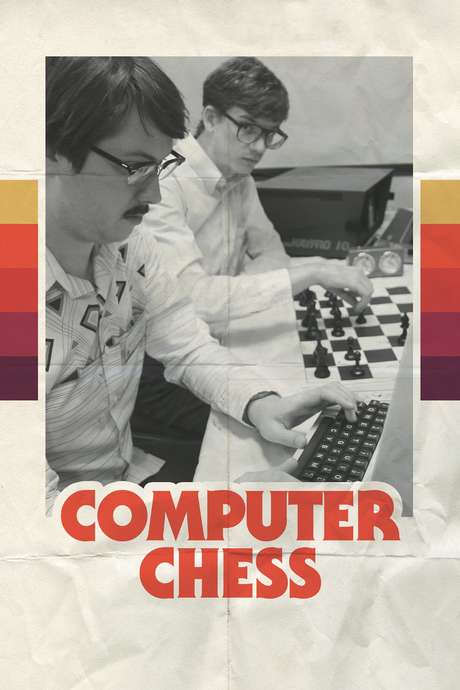 When I bought Computer Chess (2013) I was expecting a documentary on the history of chess engines and how they’ve been programed to become so strong in the game. Instead, I what I found was at first some type of mockumentary on a chess tournament between computers set in the early ‘80s. This film felt like something that you run into randomly when you check out what’s playing on Adult Swim.

There’s zero reason to care about anything happening in this film, as nothing has a payoff. The team that built the winning chess engine is hardly focused on, leaving us little reason to care when we get the big matchup between man and machine. The tournament takes place at a hotel over the weekend and the man who organized the event planned the final on a Monday and forgot to book the room for it, so he’s forced to make a deal with a cult… That’s the level of stupid we’re dealing with here. And the guy is so peeved at the people who booked the room to begin with, but allowed the game to take place, that he flips the chess board in anger. There are several storylines that take place in the film, and none of them have any kind of pay off, so no reason to care.

If I had to guess I’d say this film is trying to replicate the surrealist style David Lynch used in Eraserhead and Twin Peaks, but without his talent for filmmaking. There are interesting ideas in this film, but nothing was built on, instead hitting us with as much nonsense the filmmakers can think of. While no one would call chess engines from this period artificial intelligence, this is a fantastical world where wild and outlandish things happen. So why was nothing done with the plot line with the chess engine that seemed to become a sentient being? Because it’s a weird thing that might creep you out, not that it’s important to the story or a concept worth exploring, at least to the filmmakers.

This film isn’t a total wash. There are interesting concepts, the film did grab me in the beginning. There are natural storylines to be told here, but they were dropped for outlandishness. When people say that Hollywood should look back and remake bad films to bring them to their full potential, I think people do mean films like this one. Unless you’re looking to do something like that, I’d suggest you skip this one. 3/10.